Galbraith was the original author of Indo-US nuclear cooperation in 1962….. 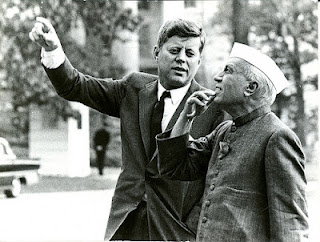 The United States encouraged India in early 60s to develop a nuclear device to fight China without comprising its commitments as a Soviet ally. In the era of Cold War, as we all know, India was a bitter opponent of the USA and a close ally of USSR. India remained staunch ally of USSR till disintegration of the Soviet empire in 1991. During Afghan jihad (1979-89), when Afghans were fighting Soviet occupation forces with the help of Pakistan, US and Saudi Arabia, India was a sworn enemy of the US. Due to its alliance with USSR, India was a target of Afghan fury during and after the jihad. In fact, Taliban regime which came into being after departure of Soviet Army was opposed to India and was allied with Pakistan. It was due to pro-Pakistan regime in Afghanistan that the country was considered a strategic depth by Pakistani strategists.

Americans are, however, warming up to India in spite their past relations. This warming up is taking place at the expense of Pakistan which has so far remained more allied than the NATO allies of the US. Some analysts dub this sudden change of hearts as a compulsion of realist politics; Pakistan has outlived its utility after Afghanistan end-game and the US needs India to contain China in the Pacific.

But it has now been emerged that the US was trying to win Indian hearts from the very beginning. There are two factors which brought the two countries together; John Kenneth Galbraith, the American Ambassador to India appointed by President Kennedy and India’s humiliating defeat in Indo-China War of 1962. Galbraith befriended Nehru during his tenure. He rendered great help to India in its hour of distress and kept Pakistan away from taking advantage of India fragile position as a result of devastating defeat at the hands of Peoples Liberation Army.

It was the same Ambassador Galbraith who was very close to former Pakistan Prime Minister Benazir Bhutto. This friendship was carried forward by his son Peter W Galbraith till Benazir's tragic assassination.

According to an article by Bruce Riedel, an analyst and a career CIA officer in The National Interest, Indi-China war also posed a crisis for America’s young president, John F. Kennedy, who had entered office determined to build a strong U.S. relationship with India. But his attention that fateful autumn was diverted to a more ominous crisis—the one involving Soviet efforts to place nuclear missiles in Cuba—that unleashed a dangerous nuclear face-off with the Soviet Union. Thus, Kennedy confronted two simultaneous crises, one far overshadowed by the other at the time and also later in history.

According to this article, when Kennedy became president in January 1961, the United States and India were estranged democracies. In the 1960 presidential campaign, Kennedy promised a departure from Eisenhower’s foreign policy and as a senator had sponsored legislation to increase food aid to India. And so it wasn’t surprising that as president he sought to woo India and its leader, Jawaharlal Nehru, into a closer relationship with Washington that didn’t require any formal anticommunist commitment from India. He sent his friend John Kenneth Galbraith to New Delhi as U.S. ambassador. Like presidents before and after, he tried to befriend both India and Pakistan and had invited Pakistan’s president Mohammad Ayub Khan to visit the United States twice during his thousand days in office. The Kennedy team hailed Pakistan as a reliable ally against communism and a model for development in the Third World.

But it was the India relationship that most preoccupied Kennedy as he contemplated U.S. relations with South Asia. Galbraith’s appointment put a Kennedy man and a firm advocate of his New Frontier at the center stage of U.S.-Indian relations. No president since has sent such a close friend and high-powered representative to New Delhi as ambassador.
According to Bruce Riedel, the most important development in the relationship emerged with the Chinese invasion of India in October 1962 to seize control of territories it claimed along the 3,225-kilometer border. The Chinese forces, superior in leadership and weapons, routed the Indian Army, which retreated in confusion from the Himalayas. The situation was most precarious in India’s easternmost regions, which were linked to the rest of the country only by a narrow land connection north of what was then East Pakistan. After maintaining its neutrality in the Cold War for fifteen years, India found itself the victim of a Chinese invasion it was powerless to halt. Nehru was devastated. He reluctantly turned to the United States and Britain, asking for immediate supplies for the Indian Army. In his panic, he also requested the deployment of American bombers to repulse the Chinese advance. America unexpectedly found itself arming both Pakistan and India, with no assurance they would not use the weapons against each other.

It is clear from Galbraith’s diary that Washington was surprised by the Chinese invasion. But, with the U.S. bureaucracy fixated on the life-and-death duel over Cuba, Galbraith was given almost no instructions from the White House or State Department during the key period of the Indo-Chinese crisis. Thus, he became the main decision maker on the American side, a role he relished. Working closely with his British counterpart, as U.S. diplomats typically do in South Asia, Galbraith fashioned a response that backed India and delivered much-needed military assistance to the Indians. Once a request for aid was formally transmitted, the first American shipments of military support arrived by air four days later. British support came as well.

Chinese intentions were impossible to decipher. After their initial victories, they paused for several weeks. Then they attacked again with devastating results, driving the Indians back in the East. Had they pressed on in the most vulnerable sector, they could have cut off Assam and eastern India and linked up with East Pakistan. Even Calcutta was at risk. Nehru asked for more aid—a dozen squadrons of American fighters and two squadrons of bombers—to redress the imbalance. In his desperation, he sought direct American military intervention, at least in the air. This would have meant war with China.

There ensued many anxious moments in New Delhi, Washington and London until China unilaterally announced a cease-fire on November 19, 1962. Kennedy never had to answer the request for air power. The war was over; India was humiliated; Nehru was devastated. But U.S.-Indian relations were better than ever before. America’s approval ratings among Indians soared from 7 percent at the start of the war to 62 percent at the end.

Galbraith’s Memoirs make it clear that, even as he faced the Chinese threat, he had to devote an equal measure of his energy and skill to managing Indo-Pakistani relations. Pakistan promptly sought to exploit India’s distress. Ayub’s government suggested to the American embassy in Karachi that Pakistani neutrality in the war could be assured by Indian concessions in Kashmir. Implicitly, an Indian refusal would bring Pakistan into the war. China tried to sweeten the deal by offering a nonaggression pact with Pakistan. Galbraith writes that throughout the crisis:

My concern . . . was about equally divided between helping the Indians against the Chinese and keeping peace between the Indians and Pakistanis. . . . The nightmare of a combined attack by Pakistan and China, with the possibility of defeat, collapse and even anarchy in India, was much on my mind.

In short, at a defining early moment in U.S.-Indian relations, when China and India were military adversaries, America found itself trying to manage the Indo-Pakistani rivalry to avoid Armageddon in India. Pakistan was outraged that America was arming its rival and wanted to be bought off in Kashmir. Working with his American and British counterparts in Karachi, Galbraith persuaded India and Pakistan to begin a dialogue on Kashmir. Nehru reluctantly agreed. Galbraith describes him as a much-diminished prime minister. He had devoted his entire life to Indian independence but now was forced to rely on Washington and London. American C-130s were delivering vital military aid, and an American aircraft carrier, USS Enterprise, was visiting Madras to show tangible support.

Galbraith suggested to Kennedy in one of his private letters that the United States and United Kingdom seize the opportunity to quietly move toward a Kashmir settlement. Galbraith opposed a territorial settlement; he envisioned a much more subtle deal that would transform the entire nature of South Asian politics, a fundamental rapprochement based on regional cooperation that would make Kashmir largely irrelevant.

JFK was determined to keep a strong alliance with Pakistan even as he improved ties with India. But as U.S. arms flowed to India in the wake of the Chinese invasion, the U.S.-Pakistani connection began to sink. Islamabad did not want an ally that armed both sides. It had not joined SEATO and CENTO to see American arms flowing to its archrival, India. Ayub feared the American arms sent to India were rapidly diminishing his qualitative advantage over his rival, and he was right.

Not surprisingly, Pakistan turned increasingly to China. After the border agreement, Pakistan signed an aviation agreement with the Chinese, which broke an American-inspired campaign to isolate that communist nation. Pakistan International Airlines began regular flights between Dacca and Shanghai. The Kennedy team responded with the first of what would become a long list of sanctions on Pakistan—canceling a deal to upgrade the Dacca airport.

The Sino-Indian war had one other major consequence: India moved closer to its decision to develop a nuclear deterrent. Nehru had begun a nuclear-power program early after independence and acquired reactors from the United States and Canada. But he insisted India would use them only for peaceful purposes. His worldview held the use of nuclear weapons to be unthinkable. But in the wake of the Chinese invasion, the first Indian voices emerged in favor of a nuclear-weapons program. The opposition party called for the development of the bomb to deter further Chinese aggression. Nehru still demurred, but the path to a peaceful nuclear-explosive test had begun.

Meanwhile, the Americans also came to realize that the United States and India likely would need the bomb in order to stop another major Chinese invasion. In 1963, Kennedy met with his military advisers shortly before his death to review options in the event of another Chinese attack. Secret tapes record Secretary of Defense Robert McNamara telling Kennedy, “Before any substantial commitment to defend India against China is given, we should recognize that in order to carry out that commitment against any substantial Chinese attack, we would have to use nuclear weapons.” Kennedy responded, “We should defend India, and therefore we will defend India if she were attacked.”

THE KENNEDY era underscores several key points about U.S. diplomacy in South Asia. First, it is virtually impossible to have good relations with both India and Pakistan. We may want them to stop being rivals, but they can’t escape their history and geography. Almost every American president has sought to have good ties with both, though none really has succeeded because it is a zero-sum game for two rivals who cannot abide America being their enemy’s friend. When we give one country a substantial gain, like the 2005 U.S.-India Civil Nuclear Agreement, the other feels hurt and demands equal treatment.

Second, China is our rival for influence in the region because it has the capacity to frustrate American goals. For Pakistanis, China is the “all-weather friend” that they can rely on, unlike the unreliable and quixotic Americans. China provided Pakistan with key technology to build the bomb in the 1970s while America was trying to prevent Pakistani acquisition of nuclear weapons. Today, Beijing is building new reactors to fuel the fastest-growing nuclear arsenal in the world in Pakistan.