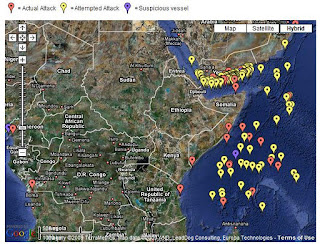 Piracy off the Coast of Somalia has now become a serious threat for international security and the global economy. This piracy has endangered innocent mariners from countries around the world and jeopardized commercial shipping interests. The attacks by the pirates also pose an environmental hazard as ships may be damaged or purposely run aground by the pirates, thereby contaminating the seas, reefs, and coastal areas with dangerous pollutants. The cause of particular concern is the unhindered growth of this menace as the pirates have, in recent years, extended their attacks to the Gulf of Aden, between Yemen and Somalia's north coast. Subsequently, the pirates have been ranging farther out to sea -- up to 600 miles -- and now affect over 1 million square miles (2.59 million square kilometers) in the Gulf of Aden, the West Indian Ocean, and the Red Sea.

Somalia’s volatile economic, social, and political conditions that began in the mid-1990s are said to be the breeding ground for this menace. With the collapse of a central government and consequent weakening of country’s naval forces, some Somali fishermen took it upon themselves to protect Somali waters, and their economic interests, from over-fishing on one hand and illegal dumping on the other by foreigners. These vigilante actions led to piracy as a means to supplement livelihoods. Emboldened by the absence of an effective ruling authority, the piracy that stems from the coast of Somalia has been transformed into a highly organized and lucrative criminal business for its leaders and enablers. It has proved to be an attractive, though risky, alternative for some impoverished young men who have few if any options to a legal livelihood. That said, pirates are criminals motivated by a desire for quick money making Somalia less attractive as a place in which to invest and create employment.

Interestingly, most of the pirates are former fishermen, whose livelihoods were hurt by foreign ships illegally fishing in Somali waters. Others joined after seeing the profitability of piracy, since ransoms are usually paid. The piracy is also sponsored by the warlords  who split the profits with the pirates. Other cadres recruited for piracy include ex-militiamen, who previously fought for the local clan warlords, or ex-military from the former Barre government used as the muscle and technical experts, who operate equipment such as GPS devices. The pirates have been adequately trained   in weapons, engines and navigation.

The accumulated wealth of the pirates has generated some economic activity in the area and the local residents appreciate the rejuvenating effect that the pirates' on-shore spending and re-stocking has had on their impoverished towns, a presence which has often provided jobs and opportunity when there were none. Entire hamlets have in the process been transformed into veritable boomtowns, with local shop owners and other residents using their gains to purchase items such as generators -- "allowing full days of electricity, once an unimaginable luxury."

The mechanism of funding of piracy operations is interesting and has now been structured in a stock exchange, with investors buying and selling shares in upcoming attacks in a bourse. Ransom money is paid in large denomination US dollar bills. It is delivered to them in burlap sacks which are either dropped from helicopters or cased in waterproof suitcases loaded onto tiny skiffs. Ransom money has also been delivered to pirates via parachute, as happened in January 2009 when an orange container with $3 million cash inside was dropped onto the deck of the supertanker MV Sirius Star to secure the release of ship and crew. To authenticate the banknotes, pirates use currency-counting machines, the same technology used at foreign exchange bureaus worldwide. According to one pirate, these machines are, in turn, purchased from business connections in Dubai, Djibouti, and other areas. Hostages seized by the pirates usually have to wait 45 days or more for the ships' owners to pay the ransom and secure their release.

Somali pirates allegedly get help from the Somali Diaspora. Somali expatriates, including reputedly some among the 200,000 Somalis living in Canada, offer funds, equipment and information. Pirates' income from ransom has been estimated to be about 39 million euro (about $58 million) in 2009 and $238 million in 2010. However, indirect costs of piracy to the victims are much higher and estimated to be between $7 to 12 billion as they also include insurance, naval support, legal proceedings, re-routing of slower ships, and individual protective steps taken by ship-owners. Further, piracy in Somalia leads to a decrease of revenue for Egypt as fewer ships use the Suez canal (estimated loss of about $642 million), impedes trade with a number of countries such as Kenya and Yemen, and is detrimental to tourism and fishing in the Seychelles.

A 2011 report published by Geopolicity Inc, investigated the causes and consequences of international piracy, with a particular focus on piracy emanating from Somalia. The report asserts that piracy is an emerging market in its own right, valued at between US$4.9-8.3 billion in 2010 alone, and it establishes, for the first time, an economic model for assessing the costs and benefits of international piracy. This model provides a comprehensive, independent framework of trend analysis, whilst also highlighting where the greatest rates of return on international counter pirate investment and policy are to be found across what Geopolicity term the ‘Pirate Value Chain.’ The report states that the number of pirates could double by 2016, increasing by 400 each year. This is being fuelled by attractive financial incentives with Somali pirates earning up to US$79,000/year; equating to almost 150 times their country’s national average wage.

Piracy has developed into a complex and lucrative enterprise; its second and third-order impacts extend deep into Somali village structure and life. Piracy does not simply enrich individuals or pirate groups; it brings wealth to entire villages. Coastal villages make money by providing food to pirates and hostages who wait for negotiations to end favorably. Local negotiators make money by bringing the ship owners to pay the ransom money via a cash drop at sea or on land. Further, pirate financiers — in many cases, pirates themselves — invest in pirate crews who venture out to capture vessels on the high seas. The wives of these pirates receive compensation money before their husbands go out on a mission.

Pirates are also provided with the necessary tools of the trade, such as satellite phones, global positioning systems (GPS) and weapons. Pirate financiers will spend as much as US$30,000 on a pirate group that “hunts” in the Indian Ocean, and upwards of US$10,000 on pirates operating in the Gulf of Aden.  And to protect themselves and their operations, pirates pay local militias (guns for hire) as much as US$10,000 per month to protect them from sub-clan rivals or external threats.

The booming business is profitable for all as the coastal villages around Haradheere receive around 5% of a total ransom payment simply for allowing pirated ships to anchor there.  All ransoms are paid in cash, and distributed between pirates, financiers, negotiators and local village elders.According to ongoing private sector research, the average “take” of pirates following the payment of a ransom is broken down as follows:

Interestingly, while the individuals who risk their lives on a piracy operation split 30% of the ransom money, the bankroller(s) ends up with 50% of the take.

To date, there is limited accessible research that identifies key pirate financiers and their associated business investments.  This represents a gaping hole in our counter-piracy approach, given that that some pirate financiers have invested in now thriving global businesses. However, as most pirate “soldiers” are illiterate, they are happy to receive large amounts of cash without knowing the true value of their services.

The system of piracy finance is wide and complex, both in terms of scope and impact. Once the international community better understands and identifies the “vertebrae” in this, the proverbial backbone of Somali piracy, the chances of combating it more effectively will drastically improve. Moreover, we will be better equipped to assist Somalis in replacing this illegitimate economic system with a more viable alternative. Doing away completely with the scourge of piracy off the East African coast is an extremely difficult proposition. However, there are a number of ways suggested by some research organizations that can address the problem more effectively than it has been to date.

According to these suggestions, it needs to be understood that piracy cannot be stopped at sea; it needs a comprehensive land-based solution. For this purpose, it is essential to deprive them of the economic incentives of piracy. The primary method to combat Somali piracy is to disrupt its economic system. Pressuring and disrupting the flow of finance to the pirates is essential. The international community must put a premium on identifying the key (Somali and non Somali) players that finance piracy, as well as conduct deep research to isolate and expose their investment patterns.

A number of governments are currently focusing on monitoring the hawalah systems – a traditional form of transferring funds found especially in the Middle East and parts of Africa – through which individuals who receive ransom cash have utilized in order to launder that money into “legitimate” businesses. With proper research, businesses that are using the hawalah systems for illegal ends (i.e. profiting from piracy) can be identified and action can be taken to stop their expansion. This, in turn, will pressure pirate financiers by virtue of removing their financial security blankets.

The supply line of the pirates can be choked and disrupted by identifying the areas where pirates buy their gear like equipment, weapons global positioning devices, satellite and mobile phones.
The international community, as part of measures to take away incentives should also offer alternative incentives. Finally, there must also be sufficient disincentives, backed by accepted and strengthened social (and political) authorities, to compel individuals to give up the business of piracy. The very attitudes, values and beliefs of piracy’s “culture” must be attacked from within by authoritative Somali voices.

Piracy is essentially not a military or national security issue; it involves bread and butter for a large part of Somali population. As it is economic issue in character, it cannot be addressed through employment of military might alone. This needs to be addressed through economic measures. Let us, therefore, shift our focus and fight piracy, not from sea but from land and that too from the economic front. As the economy of Somalia grows, young population gainfully employed in legal occupations and the investors and sponsors deprived of the return on their investment, the problem will be solved to a large extent.
at 12:25 PM No comments: