US 5th Fleet faces the Sunburn in the Strait of Hormuz.... 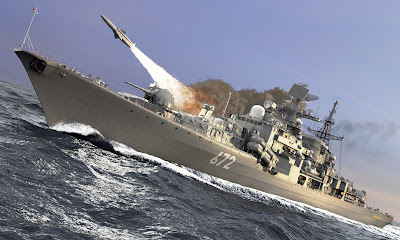 In spite of rhetoric of the Mullah regime, Iran’s nuclear capability cannot be an existential threat for Israel. It, however, is a real challenge to superiority of Israel being the only nuclear power in Middle East. Israel can hardly digest the prospect of having lost the nuclear card at the hands of Iranian Mullahs. It wants to destroy Iran’s nuclear installations in a surprise attack, have US Navy sink the whole of Iranian Navy in the Gulf and rally around the civilized world for economic sanctions to cripple and paralyze Iran’s economy.

The air attack has yet to materialize, the sanctions have started taking their toll on the ordinary lives of Iranian citizens but Iran’s resolve to go ahead with its nuclear program has not been broken. Iran is daring the US to come and fight in the Gulf and its war games in the Strait of Hormuz named as Velayat, are being perceived by independent analysts as potential threat to oil supply in case Iran is pushed to the wall.

The current stand-off between the US-led countries and stand-alone, soon-to-be nuclear-armed state of Iran has occupied the attention of those who are keenly watching the developments taking place in the region. Some are even betting on a surprise Israeli attack on Iran’s nuclear installations and are predicting a catastrophe of unimagined proportions. Iran’s persistent resistance suggests that Iran finds itself really capable to close the Strait of Hormuz for long and even creating a world of hurt for the U.S. Navy’s 5th Fleet. Iran is generally relying on a build-up of anti-ship weapons called Sunburn missiles, which it has procured from Russia and China over the last decade. These are top-notch weapons developed by the Russians as a low-cost challenge to the expensive, tech-heavy weaponry of the U.S., and specifically the aircraft carrier task force. A conflict is going to be a huge test of a global-naval doctrine that Russia and China will watch with tremendous interest. Iran's mix of anti-ship missiles (Sunburns, Onyxs, home produced, etc) is unknown, but it is armed to the teeth with thousands of such weapons in its possession.

Should the US Navy take the risk of any misadventure in the Strait? According to an analyst, the US Navy is professional, but the Strait doesn’t allow for the normal defense in depth available in open seas, in fact it offers the Iranians a cross fire setup or triangulation. If you read discussions on various military sites, there is a lively debate on American ship defense system like the Aegis. However, almost nobody claims this to be fully protective against ship strikes. And an oil tanker, no way.  It is important that the US is working on new generation laser defense to counter these missiles; however they are still in development. This puts added pressure for Iran to have this fight now, not later.

The Sunburn is perhaps the most lethal anti-ship missile in the world, designed to fly as low as 9 feet above ground/water at more than 1,500 miles per hour with a disturbing range.  The missile uses a violent pop-up maneuver for its terminal approach to throw off Phalanx and other U.S. anti-missile defense systems. Given their low cost, they’re perfectly suited for close quarter naval conflict in the bathtub-like Persian Gulf. Additionally, Iran must have plotted and mapped every firing angle and location along the Gulf, their home-court coastline. Iran’s home court strategic advantage and weaponry may mean nasty losses for the 5th Fleet. If they leave, the Iranians would use naval mines to close the strait and missiles to hamper the mine clearing operations.

There are varying opinions on this account too. According to an article in National Interest, if Tehran crosses the Obama administration’s "red lines"—developing a nuclear weapon or blocking world oil supplies transiting the Strait of Hormuz—Washington will face a dilemma. The risks of using force are high, yet the risk of inaction may also be unacceptable. If red lines are crossed the United States must respond, but it should ponder options other than bombing. One such option worthy of consideration: using mines around Iran's naval ports and oil-export terminals. This might create better leverage than a campaign of air strikes—without generating the death and destruction that could give Iran a cause for perpetual grievance. Mining would shut in both the Iranian navy and Iran's oil exports.

Modern U.S. naval mines are not indiscriminate weapons. They have programmable sensor-trigger mechanisms. These mines can be set to arm after a delay for a warning period, select targets based on a ship’s magnetic, pressure and acoustic signature, and they can be neutralized or cleared after a conflict. Naval mines have advantages over air strikes. Even precision-guided weapons might well cause civilian casualties and collateral damage that cannot be undone. Air attacks against inland targets would put American pilots at substantial risk. An air campaign could not assure the complete destruction of underground targets.

Worse, mere air strikes might not provide a successful exit strategy. An exit from conflict must be based on forcing (and also enticing) Tehran to accept a political settlement ending its threatening behavior. Yet in addition to its inherent risks, a bombing campaign might cause the Iranian people to rally in support of the unpopular regime. This could further embolden Iran's leaders.

Proponents of this option believe that it could degrade Iran's ability to shut down the Strait of Hormuz or attack U.S. forces on patrol. Iranian minelayers, submarines and missile-armed surface ships would be trapped in their ports or unable to return to them safely. Beyond that, mining Iran's oil-export terminals would impose considerable costs on the regime. According to the IMF, oil-export revenues account for more than 20 percent of Iran's $475 billion gross domestic product (GDP). Assuming that 80 percent of oil exports by sea can be halted by mines, and accounting only for lost oil profits, the net impact could be a loss of Iranian GDP equal to $59 billion over one year. This would be the equivalent of reducing Iran's GDP growth from today's 3 percent to around negative 12 percent.

Iran’s persistent resistance to the world pressure may be due to its real capabilities or it may be just a bluff. Israel and the US may actually attack Iran or are just arm-twisting it into submission. Who will call whose bluff is only a matter of time but the actual conflict will be catastrophic for both Iranian and American taxpayers.