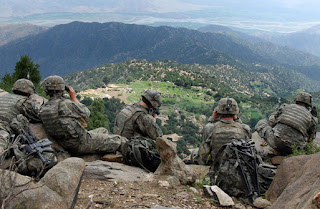 National security interests of the US and Pakistan do not converge on certain issues one of which is targeting Haqqani network of the Afghan Taliban which has not so far created any threat for Pakistan. It has not been a strategic priority to target this group, therefore, Pakistan has been resisting the US pressure to launch a military operation in South Waziristan Agency of FATA. Pakistan may have its own strategic considerations of not thinning out its troops too much at the expense of eastern borders when nearly one-fourth of its military is already engaged in anti-Taliban operations. Evidence tells us that this region barring a few elements of Mehsud tribe loyal to TTP, has not posed any terrorist threat to Pakistan. It is believed that US wants Pakistan to eliminate the Haqqani network -- which is based in North Waziristan and is one of its fiercest enemies just across the border in Afghanistan -- in any North Waziristan operation. This is the reason that frequent drone strikes are directed against this region. On the other hand, Pakistan’s major problem is rooted in the South Waziristan agency, a safe haven of TTP which has played havoc in Pakistan by targeting thousands of innocent civilians, soldiers and security interests. It is for this reason that while the Pakistani military has launched major offensives in other regions in its unruly tribal belt, it has been hesitant to attack North Waziristan, which could pose the biggest risk.

Those who are interested to know about the origin, leadership and activities of Haqqani network, should bear one thing in mind; the network has  carried out very limited terrorists operations, all against US and NATO forces inside Afghanistan whom the group treats as the occupation forces. For example, on January 14, 2008  Kabul Serena Hotel attack is thought to have been carried out by the network. Similarly, kidnapping of British journalist Sean Langan in March 2008 was blamed on the network. Other acts attributed to Haqqani network include, assassination attempt on Hamid Karzai, 2008 Indian embassy bombing in Kabul, Kidnapping of David Rohde, Camp Chapman attack and May 2010 Kabul bombing was allegedly carried out by the network.  Responsibility of none of the attacks in Pakistan was ever accepted by this network.

This network is known for its was battles against the Soviet Union in the so-called Afghan jihad funded by CIA and Saudi Arabia for their own interests. This network, under Jalaluddin Haqqani, is one of three, and perhaps the most feared, of the Taliban-allied insurgent factions fighting U.S.-led NATO and Afghan troops in Afghanistan. Haqqani's bravery and ability to organize mujahideen fighters in 1980s won him funding and weapons from U.S. and Saudi Arabia. Former U.S. Congressman Charlie Wilson, who fund-raised for the Afghan resistance, once called Jalaluddin "goodness personified". The warrior was held in such high esteem that he visited the White House when Ronald Reagan was President. After the U.S. invasion of Afghanistan in 2001, Haqqani turned his ferocity and battle skills on Western forces. He earned a top spot on the CIA hit list, along with his old friend Osama bin Laden, whom he met during the anti-Soviet resistance.

Despite ill health, Jalaluddin, who is in his 70s, still inspires Haqqani foot soldiers believed to number up to 4,000, as well as other militant groups who revere him. His son Siraj, seen as more ruthless, runs the daily affairs of the network.

The Haqqanis have become one of the biggest sources of tension between allies Washington and Islamabad. Pakistan has denied supporting the Haqqanis but has long resisted U.S. pressure to launch a full-scale offensive in Waziristan to crush the network for both domestic and foreign policy reasons. As one of the most powerful insurgent groups in Afghanistan, the Haqqanis could act as a spoiler if Pakistan feels its interests are threatened in any settlement to the ten-year war. It also sees the Haqqanis as the best insurance policy against the growing influence of rival India in Afghanistan. But caving in to Washington and attacking the Haqqanis could further destabilize Pakistan.

Pakistan hopes the United States will eventually welcome the participation of the Haqqanis in any Afghan peace talks. Kabul also understands the group can't be excluded. Although the Haqqanis fall under the command of Taliban leader Mullah Omar, U.S. officials believe they do not always accept Taliban authority and can act independently. Jalaluddin has historically shown a penchant for changing sides, as the Americans know all too well, and he may be more flexible than the hardliner Siraj. Washington is scrambling to bring stability to Afghanistan before its gradual withdrawal in July of 2011. Striking a deal with the Haqqanis may be wise while the ailing Jalaluddin might still have a say.

You may also like to read:
Haqqani Network, Pakistan connection and shattered dreams for Afghanistan peace.....
at 5:38 PM