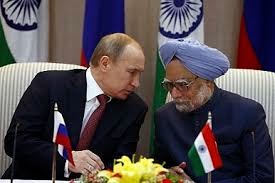 Russia has finally annexed Crimea, heretofore a part, and as much as 50% of landmass, of Ukraine, on the pretext of overwhelming majority of Russian population living in the peninsula. The annexation was formalized after a referendum, dubbed sham by the western media. Almost every member of the international community voiced concern over Russia’s actions. Even non-Western states such as China and even Iran also made clear their support for the principles of non-intervention, state sovereignty and territorial integrity – oblique criticisms of Moscow’s disregard for cornerstone Treaty of Westphalia norms. Russia got support from the countries in its area of influence like Cuba, Venezuela and Syria. The world was, however, bewildered at the stance adopted by India, claiming to be World’s largest democracy.

Has New Delhi, a new-found darling of the West, betrayed international community? Most probably yes, because West had pinned hopes on India to become a counterweight to China to serve US interests in Indian and Pacific Oceans and South China Sea.

Surprised anyone? No. This is because India has a history of its own incursions into its neighboring states that are weaker and dependent upon India. The cases of Bhutan and Sikkim are historical evidence to establish that for India, principles enunciated in the Treaty of Westphalia are not applicable as long as it can easily usurp and annex its weaker neighbors.  It even tried to make an incursion into China in 1962 but failed after a humiliating defeat at the hands of Peoples Liberation Army (PLA) of China.

Apart from the fact that the West feels betrayed at the hands of India, latter’s stance raises one disturbing question: If Russia has legitimate interests in the Crimean peninsula because of majority of Russian population, why this principle cannot be applied to the valley of Jammu and Kashmir and why India does not recognize, or respect, Pakistan’s legitimate interests in the valley? The basic principle for partition of India was faith; the Muslim majority Kashmir valley must join Pakistan as against its forcible occupation by India.

Why India has deployed a large chunk of its army in Kashmir to suppress the movement against Indian occupation in which tens of thousands of innocent lives have been lost? Why a demand for a plebiscite in Kashmir, promised by India’s prime minister, angers India every time it is raised at the UN?

India’s desire to realign itself with Russia in the upcoming bipolar world is welcome but even the most ruthless stance in international relations is taken on some principles. If the principle is that forcible occupation legitimizes the stance, then India is doing no favor to its democratic posture which is exposed to the risk of further erosion after the current elections being fought on the basis of Hindutva.
at 2:30 PM