Handing over Gwadar Port to China is now too little too late…. 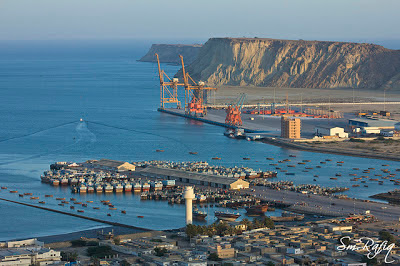 If we infer from empirical evidence that Gwadar Deep-sea port on Makran Coast is first of the three major factors of Balochistan insurgency, it will not be an exaggeration. The other two factors are natural gas and oil reservoirs in Balochistan which are “weapons of mass destruction” attracting attention of the West and the USA; and of course Iran-Pakistan gas pipeline. The Gwadar Port has both commercial and strategic significance. It commercial significance hurts economic interests of Pakistan’s so-called friends in the Umma and its strategic importance hurts India and the US. The port was built by China and is undoubtedly a precious gem in the String of Pearls. It gives China a shortest possible route for its import of oil from the Gulf and it gives China and Pakistan a strategic advantage over Indian-built Chabahar port West of Gwadar in Iran.

India and the USA along with UAE had openly opposed the construction of the port through funding and fueling armed resistance in Balochistan. Major outcome of this insurgency is inability of Pakistani government to build enabling infrastructure of rail and roads through Balochistan thus making the port dysfunctional. The operator of the port, Port of Singapore Authority had no long-term stakes in the infrastructure; therefore, it remained dormant while the port was dysfunctional.  During this period, the insurgency remained under check except for media war fought by separatists highlighting the issue of their foot soldiers’ having disappeared.

However, the situation is changing and there is a gross danger of wide-spread insurgency and renewed wave of fighting because of a recent decision of Pakistani government to say goodbye to Port of Singapore Authority and hand over operation of Gwadar deep-sea port to a Chinese corporation. It does not augur well for Pakistan, at least in the near term. This will usher the country in general and the province of Balochistan in particular, into a renewed spate of fierce fighting, killings, terrorist attacks and enhanced level of insurgent and separatist operations. Those opposing this port will try once again to activate the insurgency and do whatever they can to fund and arm the insurgents to make it impossible for China to make the port functional and build the enabling infrastructure. This is what they have been doing ever since construction of the port started.

This decision will inject a certain amount of realpolitik sense to the rhetoric of higher-than-mountains and deeper-than-oceans Sino-Pakistan relations. The United States and Pakistan are not exactly on the best of terms, China is a rising power, they share a common interest in containing India which is in direct conflict with US interests in the region.  As a result, there has been the occasional press story about closer ties, which begets the inevitable U.S.-based blog posts about China expanding its "string of pearls" strategy of more deep-water ports in the Asia/Pacific region. There are some analysts who would want us to believe that this latest development would neither please China nor annoy the US. According to them, a rising China with global ambitions is unlikely to supplant the United States in Pakistan, according to Chinese experts on Pakistan, as well as Pakistani and American officials. And while Pakistan’s latest flirtations with Beijing have been received cordially, Pakistani officials have walked away from their junkets with far less in hand than they might have hoped. This is because “China’s core interests lie elsewhere — in its competition with the United States and in East Asia,. China has shown little interest in propping up the troubled Pakistani economy, consistently passing up opportunities to do so.”

According to a New York Times story, Chinese Firm will Run Strategic Pakistani Port, the fate of Gwadar, once billed as Pakistan’s answer to the bustling port city of Dubai, United Arab Emirates, has been a focus of speculation about China’s military and economic ambitions in South Asia for the past decade. Some American strategists have described it as the westernmost link in the “string of pearls,” a line of China-friendly ports stretching from mainland China to the Persian Gulf, that could ultimately ease expansion by the Chinese Navy in the region. Gwadar is close to the Strait of Hormuz, an important oil-shipping lane. But other analysts note that Gwadar is many years from reaching its potential, and they suggest that fears of creeping Chinese influence might be overblown.

The New York Times is confident that despite Pakistan prostrating itself before China, Beijing has been extremely leery of getting too enmeshed in that country.  It has rejected repeated requests for military basing, and only now has a commercial Chinese company agreed to manage a port that appears to be the Pakistani exemplar of "white elephant.

The handing over of port operations to Port of Singapore Authority was flawed in the first place. This port should have been operated by China from day one. The decision at this stage is too late too little to say the least. But it will have perilous fallout for the province of Balochistan, for the country and the security establishment. The Court and the media, in the meantime, will have a field day for the reasons best known to everyone.
at 11:02 PM