The Velayat in the Strait of Hormuz is no ordinary war-games…. 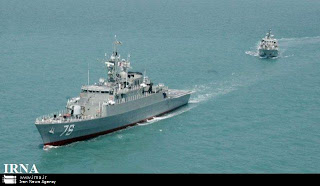 The world seems to be united to teach Iran a lesson it cannot afford to forget. Everyone, nearly everyone, has designs to strip Iran of its oil wealth to pressure it into submission on its nuclear program. But surprisingly, the isolated Iran is defiant and kicking. As Europe is working on a ban on importing oil from Iran and an amendment to the 2012 U.S. defense authorization bill seeks to close down transactions with Iran's Central Bank, there are other related developments taking place. China's leading refiner, Sinopec, halved its January purchases of Iranian crude on a dispute over credit terms, while Saudi supplies surged by a third.

Everything is taking place to achieve the fundamental objective of the anti-Iran world: to narrow the circle of Iran's customers to China and a few others, giving them the ability to extract discounts and thus starving the Islamic Republic of revenue. But these are not the unilateral developments. While Iran is panic-stricken, it has created panic of the matching proportion for the world by officially commencing its 10-days war-games exercises, named as Velayat-e-90, in the Strait of Hormuz.


The exercises could bring Iranian ships into proximity with United States Navy vessels in the area. "Velayat" is a Persian word for "supremacy" and it is currently used as a title of deference for the Iran's Supreme Leader Ayatollah Ali Khamenei. The war games cover a 2,000km stretch of sea off the Strait of Hormuz, northern parts of the Indian Ocean and into the Gulf of Aden, near the entrance to the Red Sea. It will be Iran's latest show of strength in the face of mounting international criticism over its controversial nuclear program, which the West fears is aimed at developing atomic weapons. This is a very significant development which means that, if pushed to the wall through international sanctions, Iran can block this most strategic waterway depriving the world of the precious commodity of oil passing through the Strait. 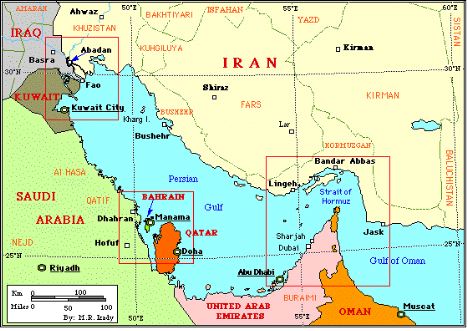 Located between Oman and Iran, the Strait of Hormuz connects the Persian Gulf with the Gulf of Oman and the Arabian Sea. Hormuz is the world's most important oil chokepoint due to its daily oil flow of 15.5 million barrels in 2009, down from a peak of 17 million bbl/d in 2008. Flows through the Strait in 2009 are roughly 33 percent of all seaborne traded oil (40 percent in 2008), or 17 percent of oil traded worldwide. On average, 13 crude oil tankers per day passed eastbound through the Strait in 2009 (compared with an average of 18 in 2007-2008), with a corresponding amount of empty tankers entering westbound to pick up new cargos. More than 75 percent of these crude oil exports went to Asian markets, with Japan, India, South Korea, and China representing the largest destinations. At its narrowest point, the Strait is 21 miles wide, but the width of the shipping lane in either direction is only two miles, separated by a two-mile buffer zone. The Strait is deep and wide enough to handle the world's largest crude oil tankers, with about two-thirds of oil shipments carried by tankers in excess of 150,000 deadweight tons.

Closure of the Strait of Hormuz by Iran will jolt the oil world as it would require the use of longer alternate routes at increased transportation costs. Alternate routes include the 745 mile long Petroline, also known as the East-West Pipeline, across Saudi Arabia from Abqaiq to the Red Sea. The East-West Pipeline has a nameplate capacity of 4.8 million bbl/d. The Abqaiq-Yanbu natural gas liquids pipeline, which runs parallel to the Petroline to the Red Sea, has a 290,000-bbl/d capacity.

A new bypass is currently being constructed across the United Arab Emirates. The 1.5 million bbl/d Habshan-Fujairah pipeline will cross the emirate of Abu Dhabi and end at the port of Fujairah just south of the Strait. Other alternate routes could include the deactivated 1.65-million bbl/d Iraqi Pipeline across Saudi Arabia (IPSA), and the deactivated 0.5 million-bbl/d Tapline to Lebanon. Additional oil could also be pumped north via the Iraq-Turkey pipeline to the port of Ceyhan on the Mediterranean Sea, but volumes have been limited by the closure of the Strategic pipeline linking north and south Iraq.

According to a recent article carried by Foreign Policy, oil sanctions are a bad idea if they work, and a bad idea if they fail. If they work, American allies will be punished and some economically vulnerable countries, such as Greece, will suffer a cutoff of oil just at the time they can least afford it.Or, if they "succeed" more dramatically, and Iran's exports are really interrupted, oil prices will soar, plunging the world back into renewed recession. Tehran can also respond by sabotaging oil facilities in its Gulf neighbors and fomenting trouble via its proxies in Iraq's oil hub of Basra. An isolated Iran can afford to play such a dangerous game with the global economy.

But most likely, oil sanctions would fail, and a great deal of diplomatic capital will have been expended to no avail. Japan and South Korea, for instance, both rely on Iran for 10 percent of their crude imports, and waived oil sanctions. Turkey renewed its long-standing crude contract last Wednesday. And despite its incompetent response so far, Iran should be able to find ways round tightened oil sanctions -- barter trade, for example, or smuggling via Iraq and Pakistan -- with the assistance of ingenious sanctions-busters lured by lucrative deals. What it loses in discounts to China is largely made up by the higher prices these geopolitical tensions bring. The United States' last secret weapon -- embargoing gasoline shipments to Iran -- inspired Tehran to make its long-overdue subsidy reform and step up domestic refining capacity. In a way, the U.S. Congress did Iran a favor.

This imminent clash between Iran and international titans, apparently, makes no sense. The ultimate beneficiaries of the sanctions would not be US or Europe; it would surprisingly be the America’s rivals: China and Russia. Iran, a country with 2 percent of US GDP and 1.5 percent of its military budget, will prefer to tilt towards China even if it had to offer discounts on its oil sales. Meanwhile, Russia's Urals grade is, unusually, fetching higher prices than better-quality Brent oil as European refiners scramble for alternatives to Iran. And the Kremlin is glad to see the neutering of its greatest potential rival in the EU gas market.

Will the United States shoot itself in the foot through these sanctions? This question is not difficult to answer and immediate answer is in affirmative. The biggest lesson of history is that nations don’t learn any lesson. The cost of sanctions to the U.S. economy of expensive oil, was in the neighborhood of half a trillion dollars, caused by decades of sanctions on investment in Iran, Iraq, and Libya. The cost of the proposed sanctions is never mentioned.

But the sanctions and the escalating costs of transportation of oil due to Hormuz blockade by Iran would draw the US into another misadventure. This could destabilize the region further and transform it into breeding ground for US-hatred, extremism and terrorism. The Velayat in the Strait of Hormuz is no ordinary war-games and must be taken seriously.